The Himalayan Rocket Stove Project is taking an ultra efficient wood burning stove design tailored to the Himalayan context to India this year for production and distribution through northern India. These stoves address three key issues facing the people and environment of the Himalayas, namely deforestation, women’s health and air pollution.

A ‘rocket stove’ is a design concept for fuel stoves that are reknown for their high efficiency and low pollutant burn characteristics. They are widely used in a variety of contexts… the 2 most notable are:

2. Thermal mass heaters in cold climate situations where their efficiency is paramount.

These applications of the rocket stove concept are great, but neither fits the Himalayan context where people both heat the room and cook on the one stove whilst sitting on the ground next to it.

In 2014, whilst travelling in Ladakh, I decided to develop a prototype that will work in the Himalayan context. I wanted to make one that would fit straight into the homes of everyday village people who were used to being able to sit on the floor and cook on the top of the stove at the same time the stove was heating the room.

As a result of 2 years of experimental testing and prototyping, I am happy to announce that the ‘Himalayan Rocket Stove’ is ready to take into production. The current version is able to also heat water while being used as a cooktop and room heater and a new version that charges phones is under development.

As a result of receiving a grant from the USA, I am able to take this working version into production in India later this year. In this first year of production a limited batch of stoves will be made and placed into schools, nunneries and needy monasteries, as well as some low-income families, for testing over the coming winter season (2016/17).

What’s So Good About Rocket Stoves?

These stoves are so efficient, each stove we have working throughout the winter season saves one mature tree (or the equivalent of) from being felled in the forests of the Himalayas! We did a lot of research to come up with that stunning fact, and stand by that figure.

Apart from the obvious benefit of saving forests, another of the implications of saving that “tree” is the savings to the health and well being of village women and children who tend to do most of the foraging for wood. Women from mountain villages often show signs of permanently stooped backs in their middling years, as a result of a lifetime carrying heavy loads down precarious trails. 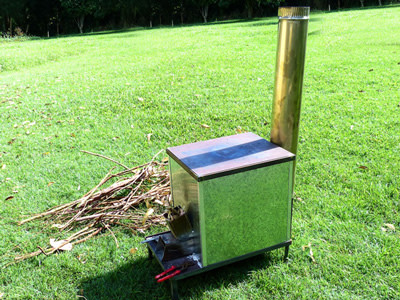 Each tree (or the equivalent amount of wood - 2000KG) that we save from being burnt, is the amount of wood that does not have to be carried. That’s 100 loads at 20KG each that is not being loaded on the backs of women and children to be carried over steep terrain at great risk.

The other benefit of these stoves is how clean they are. Due to the high temperatures they operate at, there is virtually no smoke emitted from the combustion process. All the smoke is consumed in the high temperature vortex at the heart of the stove which is the main reason they are so efficient. Unburnt smoke from traditional stoves is not only polluting, but also a waste of unused energy.

With far less wood being burnt (around 20% of normal consumption), and that which is consumed being non-polluting, this means far less emissions overall. In terms of CO2, we are looking at saving over 3.5 tons every year, for every stove, from being emitted to the atmosphere.The testing process will allow me to put several variations of the Himalayan Rocket Stove into the field for observation and will allow me to inspect the wear and tear on components after a season of usage.

Due to the high operating temperatures of rocket stoves, finding the best materials for longevity is crucial to the success of this project. Various design parameters will be explored to find the best combinations for each situation.

I had already been planning to launch a crowdfunding campaign prior to receiving the grant, and have decided to go ahead with this campaign as the more funds we can raise from the outset, the more stoves we can make this year and get into the field as soon as possible.

Every dollar raised through the crowdfunding goes directly into making more stoves, as we already have the funds required to set up and refine the production process.

Based on fuel consumption studies in the Indian Himalayas, and the efficiency ratings of rocket stoves generally, I estimate that each stove working throughout the winter season will save one mature tree from being felled in the forests of the Himalayas (the equivalent being 2000kg of green wood or 1000kg of dry wood).

Apart from the obvious benefit of reducing impact on forests, one of the main implications of reduced fuel demand is the savings to the health and wellbeing of village women and children who tend to do most of the foraging for wood. Women from mountain villages often show signs of permanently stooped backs in their middling years, as a result of a lifetime carrying heavy loads down precarious trails.

Each stove saves 2000kg of wood, which in turn saves 100 heavy loads at 20kg each being carried by women and children over steep and often dangerous terrain.

The other primary benefit of these stoves is relates to pollution. Due to the high temperatures they operate at, virtually no smoke is emitted from the combustion process. The smoke is consumed in the high temperature vortex at the heart of the stove and released as heat energy. Unburnt smoke from traditional stoves is not only polluting, but a waste of unused energy.

With far less wood being burnt (15 - 20% of typical consumption), and that which is consumed being virtually non-polluting, this means far less emissions overall. In terms of CO2, we are looking at saving over 3.5 tons per year, per stove from being released to the atmosphere.

I’ve been travelling (and running tours) to the Indian Himalayas for 25 years and was one of the first Westerners ever to travel to the remote and restricted Indo/Tibetan border region of Spiti. This culturally Tibetan valley captured my imagination and inspired me to keep returning to visit the monk I began sponsoring there in 1992.

Over the years, I been involved with organising the sponsorship for a 1000 year old monastery, an eco school, a solar passive eco house project, and most recently a solar water pump for a school in the region.

I love practical projects that support and empower people to live their own lives and ultimately to find their own solutions to the issues raised by a rapidly changing world. Having seen first hand the changes caused by climate change in the Himalayas, I am now passionate about finding ways to reduce the impact of deforestation and pollution caused by burning wood.

Link to the Project

One thought on “The Himalayan Rocket Stove Project”