“8”; the debut EP from Yuneer Gainz is a “Hi” in the form of story telling, honesty, and melody; all from the front seat of his car.

8 is the first offering from independent artist Yuneer Gainz. This is a time capsule of reflection, fears, courage, pursuits, and wishes from the front seat of his car. This project was created while Yuneer was not only interning at a studio in New York City for 6 days a week, but also living out of his SUV. 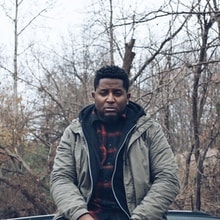 Chuck Thompson, Neo Da Matrix, Bangladesh; touring along side Jay Z’s for his Blue Print 3 Tour and Reflections Eternal (Talib Kweli and Hi-Tek) before touring in Europe on his own as an independent recording artist from 2009 to 2014.

With the knowledge and skills he obtained working for others, Yuneer Gainz is now releasing his first body of work in the form of an EP titled “8”. “8” stands for the amount of months he has spent working behinds the scenes of music making. His music consists of rock/RnB/hiphop/jazz melodies, modern and vintage rap cadences, and random voice inflections. Most of his songs contain story telling lyrics and combinations of singing and rapping.

HOME - The most important good in our life