Project Genom is a third-person sci-fi shooter MMO under development by a team of enthusiasts with the goal of creating an ideal MMO experience for all fans of the sci-fi setting around the world. In addition to the authors’ vision, the game is shaped by the feedback and ideas provided by players who are participating in the closed alpha test. 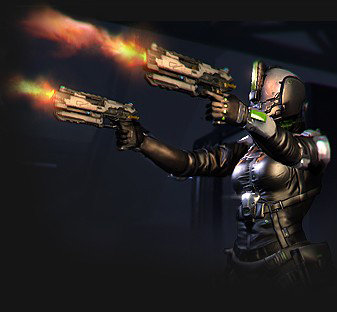 Sci-fi mmorpg Project Genom will let you participate in the battle for the survival of humankind. Having destroyed their own planet, humans have found a new home and a seemingly happy life on Avalon. But people are not the only ones who liked the place. What attracted to this planet the mysterious almer? More evolved, more powerful, and united, they destroyed human forces wherever they clashed. It seemed there was no hope left, but the tides of time bring new heroes, and you have a chance to become one! Defend your race and stand up for what you believe in, feel the new power that humanity will come to possess with Project Genom.

In new sci-fi MMORPG Project Genom players will embark on a space journey to explore other planets.

The Neuronhaze company is happy to present you a new MMORPG shooter where players will fight for the survival  of mankind, explore new planets and outer space.

After people had destroyed their planet, they roamed among the stars where they thought they’d found new home, but it is not all that simple… The environment of the alien world is not welcoming, and humans have to fight for their survival.​ ​

One of the game’s most distinct features is an absolutely non-linear storyline. During their travels around the vast and unfamiliar world, the remaining survivors acquire new knowledge that will help them adapt to their new-found home. But players are not tied to a limited number of plot-defining decisions they have to make – they are free to choose what they want to do, to crush a butterfly or to step over it. Your every move has consequences as to how the story unfolds, while some of your actions may profoundly change the world of Genom. You will also have to deal with global events that have an impact on everything, including players.

Of course, to survive you will have to fight, for the nature of this world strongly resists any intruders. That is where all the equipment will come in handy, from rifles and pistols to blades and special skills. The latter allow a character, with the help of mutagens in the blood, to transform into a creature using symbiotic and psionic attacks. But that’s not all. You may come to possess a turret or a huge combat robot with heavy weapons and thick armor, which are only a small part of the whole array of weapons and equipment available in the game.
The game world is not just one planet. Every player can build their own spaceship (which, by the way, is capable of carrying out an attack from the orbit), hire a crew and go on an interstellar journey. But space is no safe haven either – to reach another planet one must be ready to face many challenges, including space battles.​ ​

This project is developed by a small Russian team of eight people and has successfully completed its early testing stage not long ago. Starting July 1, Project Genom is up for voting on Steam Greenlight, and the entire development team hopes that together we will easily pass the voting stage.

The Neuronhaze company, as promised, invests all the money it receives in the development of the project. The first results will show soon. In December, the game will have such features as resource procurement, crafting, transport, fighting robots and significantly increase the size of the existing world. But, most importantly, mutations will be introduced in the game. Your character will be able to grow new and enhance existing organs or replace them with cyberimplants. Depending on your choice, your character will have new abilities and paths for development.
Link to the Project:
https://pgenom.com
Games
Previous PostBest Social Media Places to promote your crowdfunding campaign Next PostMonthly Tees Club - Custom T-Shirt Monthly Subscription Box